London was cold today, when I say cold, I mean cold. The temperatures have drastically fallen, and today, we saw snow.

Snow you ask, but London snows all the time, you ask. But this is October. Normally, it’s a bit warmer, with traces of summer. Winter is a long way from now yet many parts of the country hit zero degrees. This leaves us wondering how Dec will be like, or Feb, the coldest month of the year.

Snow is good, don’t get me wrong, but you need a warm house to get back to, but with the high gas and electricity prices, what do we do?
By Maua at 20:53 13 comments:

Today I received the shocking news that my cousin is in hospital after being attacked by a judge in Nairobi. A judge of all people? I thought their roles are to prevent these things from happening.

Robert, our prayers are with you. Get well quick.

Section 62 of the Constitution reads: "A judge of the High Court may be removed from office only for inability to perform the functions of his office (whether arising from infirmity of body or mind or from any other cause) or for misbehaviour, and shall not be removed except in accordance with this section."

If my mum (bless her soul) caught me drinking, smoking, taking drugs and having sex at 13, I guess I’d be dead by now. I had sex for the first time at 19, and I went off men for a number of yrs. I had my first shandy and got drunk at 18. The following day I had a massive hungover with cold sweats and my mum, thinking I had malaria got me chroloquin. It was either that or a confession, but a confession to what, digging a grave for myself.

Any normal mother would go nuts if their 13 yr old confessed to drinking, drugs, smoking and being laid, but Sam Holt’s mother thinks it’s 'sweet' rather than shocking and instead rewards her with cigarettes on the rare occasions when she behave.

Tracy Holt, 43, knows Sam drinks but is just relieved that it's not more than a couple of cans of beer a night. She didn’t get angry about her daughter losing her virginity at 12, instead insisted that Sam uses contraception. It wasn't a one-night stand. She had been dating the guy for a couple of weeks. 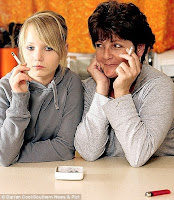 'If I ground her, I'm just punishing myself because I have to put up with her in the house. Instead, I reward her good behaviour by giving her cigarettes. If she's bad, she goes without. She's a little comedian. I let her get away with a lot of cheek. It's sweet. Giving out cigarettes as a reward 'works'.

Miss Holt said: 'There are a lot worse things she could be doing’.

What could be so worse than all the above for a 13 yr old.

Murder due to Financial Crisis

The financial crisis has hit so hard that people are now taking measures to try and survive. This man took a bigger step and murdered his whole family. But Why??????????

It's just got me thinking how much I love my son, and there's no way, absolutely no way I'll take such a decision and cut short his life.

'Son, you are the best thing that has ever happened to me. You give a reason to my living. When I look at you every morning, crunch or no crunch, I know you have to eat, dress and be housed, and that refuels my will to get up, drag my butt to my boss'.
By Maua at 13:04 7 comments: